Since last Thursday I’ve been based at Leeds Museum Discovery Centre, getting some experience in displaying and interpreting an object.  The object in question is the marvellous Heavy-footed Moa shown above, warming its old bones in front of an imposing fireplace in the stores. 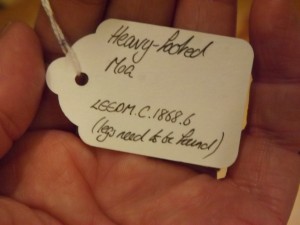 If you think its unkind giving an animal such an uncomplimentary name, pity the Stout-thighed Moa. On the other hand, I love that someone’s gone to the trouble of tying ribbons round its ankles. Its lucky to have ankles, looking at the label you can see hanging from its derriere.

The actual age of the skeleton is uncertain, but its been in Leeds since 1868, when it was bought by the Leeds Philosophical and Literary Society for its Natural History collection.  After a bomb strike in 1941, the mount was damaged and the moa languished in storage until 2011 when it was given a new lease of life through conservation and repair. (A  ‘Secret Lives of Objects’ Blogpost  describes the mount making process).

Clare Brown,  Curator of Natural Science , outlined the project, which is to have the moa on display in the Leeds City Museum in March 2014.  My first task was to set out a workplan.  This immediately raised questions, some of which Clare could answer and some were noted to ask in the series of meetings she’d  set up for me with key people.  Then followed orientation, a visit to the moa in the stores and to the archive files, and making a start going through the information in the files. 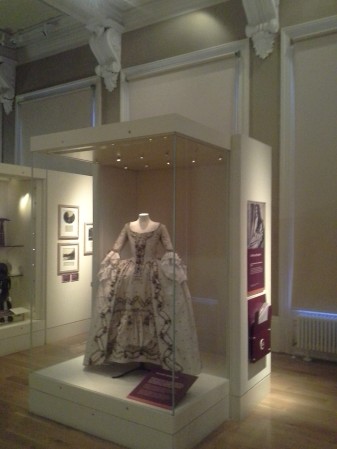 The proposed display space in the Leeds Collectors gallery is currently occupied by a beautiful dress collected by Kenneth Sanderson.

Friday started with a meeting with Dave Hudson, the head technician, to think about how the moa might be moved 1.7 miles without damage; to factor in his time to build the necessary framework, and to arrange to set a date for the move.

Next, a quick check that Natalie Raw (Curator, Costumes and Textiles) could be available to remove the dress on the installation day.

This was followed by my building induction with Gemma Pollard, the Site Development Officer.  Then after lunch, a brisk walk to the Museum to look at and measure the proposed space – raising a slight worry that there wouldn’t be enough headroom!  I investigated the other displays, and thought about how the moa would relate to them.  The link to the Leeds Collectors is the display about the Leeds Philosophical and Literary Society, showing the study of a Society member, along with information and photos of the collections in Philosophical Hall, where the moa was an important feature. 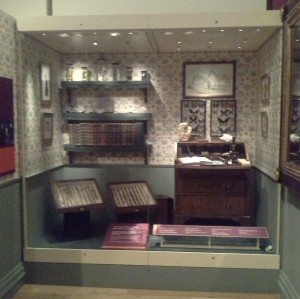 Clare works part-time, so I was on my own till Wednesday.

First thing Monday therefore was a quick visit to the moa armed with a tape measure prior to meeting the Conservator, Emma Bowron.  She showed me the conservation report and confirmed it wouldn’t need any further work before display.  We discussed environmental requirements ( the display lights are fibre optic – fortunately moa’s head would not be cooked) and Emma’s crucial involvement in packing the skeleton into the frame prior to transport and unpacking at the other end.

On Tuesday I met Hannah Dancer, Marketing, to discuss a publicity strategy.  The course I attended on ‘Maximising your online presence’  (was it really only last Wednesday?) came in handy, at least in my understanding of her proposals about the use of social media.  I left the meeting with a few more jobs – among them to produce bullet points for the basis of a draft press release, think up a hashtag, plan tweets and write a blog (that wasn’t extra).

Wednesday was a catch-up with Clare and continuing with what has taken up all the rest of my time – finding out how the skeleton and the 127 other bits of moa came into the collection; trying to locate papers, documentation, photos and previous research; deciphering 19th century handwriting: trying to answer questions such as ‘What are the enormous eggs in that old photo and are they still here?’; getting my head round the Museum’s Interpretation Policy, Flesch-Kincaid readability counts etc. – and making a start on the display labels.

That was one week.  One more week to go …